The Institution of the Last Supper Maundy Thursday 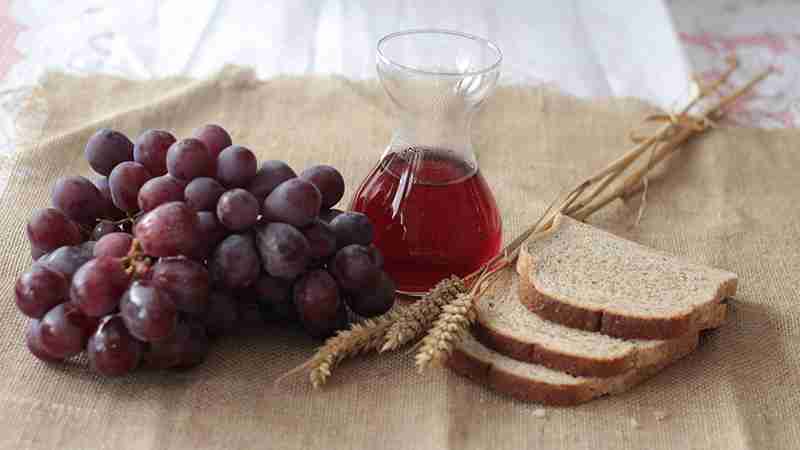 When the hour came, he took his place at the table, and the apostles with him. He said to them, ‘I have eagerly desired to eat this Passover with you before I suffer; for I tell you, I will not eat it until it is fulfilled in the kingdom of God.’ Then he took a cup, and after giving thanks he said, ‘Take this and divide it among yourselves; for I tell you that from now on I will not drink of the fruit of the vine until the kingdom of God comes.’ Then he took a loaf of bread, and when he had given thanks, he broke it and gave it to them, saying, ‘This is my body, which is given for you. Do this in remembrance of me.’ And he did the same with the cup after supper, saying, ‘This cup that is poured out for you is the new covenant in my blood. But see, the one who betrays me is with me, and his hand is on the table. For the Son of Man is going as it has been determined, but woe to that one by whom he is betrayed!’ Then they began to ask one another which one of them it could be who would do this. Luke 22: 14 – 23.

The Holy Eucharist is the mainstay and the cornerstone of Christian Faith and every time we receive the Sacrament how often to we think of the institution of the Sacrament on that first Maundy Thursday. After the Passover meal our Lord washed the feet of his disciples and gave them a new commandment : “A new commandment I give to you, that you love one another: just as I have loved you, you also are to love one another.” Mandatum novum do vobis : ut diligatis invicem : sicut dilexi vos, ut et vos diligatis invicem. John 13: 34. And it is undoubtedly from the Latin which was the Introit for the day that the word Maundy arises.
In most European countries, Maundy Thursday is known as Holy Thursday; other names are Green Thursday (Gründonnerstag; common in Germany), from the early practice of giving penitents a green branch as a token for completing their Lenten penance, and Sheer Thursday (clean Thursday), which refers to the ceremonial washing of altars on Maundy Thursday which we still do and after the Eucharist in St John’s the Altars will be stripped. Compline said and we leave the Church in darkness and silence as we prepare for the great Solemnity of Good Friday.

Last year 2020, perhaps for the first time ever, the ancient tradition of the Royal Maundy ceremony was cancelled.

Centuries of tradition have been overturned as one of the Church of England’s most interesting Christian ceremonies is unable to take place as the Queen as far as we know will be in isolation at Windsor Castle.

No-one knows for sure when, or if, Royal Maundy has been cancelled before. Even during wartime, King George VI and the Archbishop of Canterbury were able to uphold the tradition.

However, the unprecedented circumstances the world is facing right now means there is simply no other option than to break tradition.

So what is the Royal Maundy?

It seems to have been the custom as early as perhaps the 13th century for members of the Royal family to take part in the special ceremonies of Maundy Thursday Maundy, to distribute money and gifts, and to recall Christ’s simple act of humility by washing the feet of the poor. Henry IV began the practice of relating the number of recipients of gifts to the monarch’s age, and as it became the custom of the monarch to perform the ceremony, the event became known as the Royal Maundy.

Following on from the example of our Lord washing the feet of the disciples by the fourth or fifth century a ceremony had been developed following the Mass on Maundy Thursday, for senior Clergy to wash the feet of the poor known as the pedilavium.

The first English monarch to be recorded as distributing alms at a Maundy service was the ‘wicked’ King John who on 15 April 1210 donated garments, forks, food, and other gifts to the poor of Knaresborough, Yorkshire. John is also the first English Sovereign to be recorded as giving gifts of small silver coins to the poor when in 1213 he gave 13 pence to each of 13 poor men at a ceremony in Rochester Cathedral, this number was symbolic of our Lord and the Twelve Apostles Sadly, few details of the 13th century Maundy Service and associated ceremonies survive.

By the reign of Edward III ( 1312 –1377) the Sovereign would occasionally perform the pedilavium and in 1363 the King also gave gifts: of fifty pence to each of fifty poor men.[9] It is not known, however, whether it was as yet the practice each year to have the number of pence and the number of recipients track the monarch’s age: Henry IV a Plantagenet of the House of Lancaster was the first monarch to make it the rule that the number of pence given be determined by the monarch’s age.

The Pedilavium was not performed every year and in 1689 King James II abolished the practice but retained the Royal Maundy money for the poor. Since the Accession of William III until 1952 Monarchs did not always attend the Ceremonies, but since the start of The Queen’s Reign, Elizabeth II has attended each year except in extremis and the Queen changed the venue from Westminster Abbey to other parts of the Kingdom.