So just who is this young Jewish guy who gets nailed to a tree and then comes back to life? 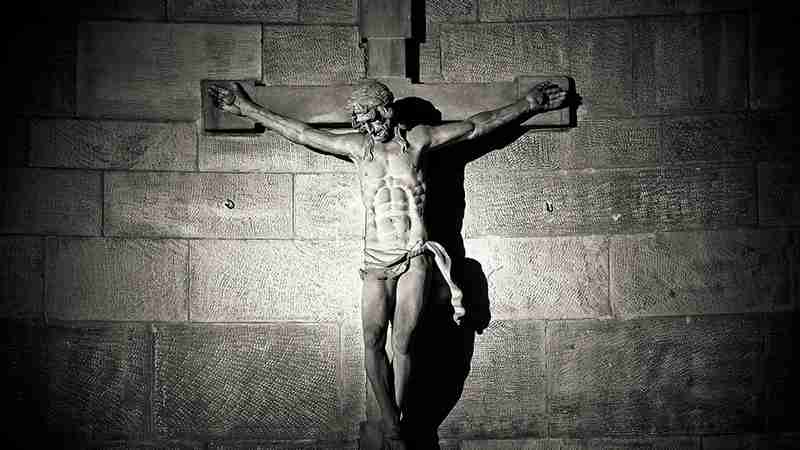 We often have a very sanitised picture of Jesus as a man; to quote Charlotte when she was younger…‘Did you know Daddy, that Jesus wore a dress and flip flops?’ Jesus in a long white robe, the traditional dress of the Middle East, his head frequently covered as becomes an observant Jew; then there is the long hair and the beard… so we have the Jesus of the ever so common paintings and stained glass windows, a man with an almost European countenance. Here is the Jesus of my least favourite hymn: ‘Gentle Jesus, meek and mild, look upon a little child; pity my simplicity, suffer me to come to thee.’

It has to be said, that so often the Church, with the best of intentions has succeeded in portraying Jesus Christ as a bit of a wimp, which is most definitely not the picture that we can discern from Scripture. True, Jesus sometimes has gentleness about him, but it is the gentleness that is not meek and mild, it is the gentleness of understanding, understanding of the human condition with all its foibles; the Jesus who knows us better than we know ourselves. Then on the reverse side of the coin we meet the robust and sometimes angry Jesus, Jesus the rebel, the man who is God who can be uncompromising about hypocrisy; Jesus who turns the accepted norms of Judaism upside down.

So how do we understand Jesus the Christ at this time of the Liturgical year particularly, as we bow our heads and feel the pain in our hearts as this young man undergoes his bloody Passion and is hung up on a tree and left to die the death of a common criminal, yet who three days later comes back to life as he conquers death. This is all very mind-blowing… and if it doesn’t blow your mind it should. Here is something that is so out of the ordinary that it defies rational and scientific reason; people don’t die and three days later come back to life.

On Easter Day when we sing as we always do… Jesus Christ is risen today, Alleluia!  has the hymn itself become like singing Carols at Christmas, the norm, without giving it really much thought! Is this our understanding of Jesus… remote… two thousand years remote? Are we connecting with the magnitude of the crucifixion and the Resurrection or are we accepting it as just a part of the rolling liturgical year?

The film in which Paul Schofield played Thomas More, Henry VIII’s Chancellor was called ‘A Man for all seasons’; but Jesus is truly, the man for all seasons, from before the creation of the world to its end, with everything in between. Jesus is not that remote figure wearing a dress in Palestine, two thousand years ago… he is the Jesus of yesterday, today and tomorrow… take away ‘the dress’ and substitute ‘Jeans and trainers’ and you have the Jesus who relates to the young in this modern world, substitute a business suit for the jeans and you have the Jesus who relates to the more mature, put Jesus in a loin cloth and he relates to South American Indian Tribes…and so I could go on.

Is Jesus white, black or in between?  He is all of these; because in him there are no barriers. Jesus is at one, our Father, our Brother and our friend…no matter what our race or our colour; nothing we say or do will surprise him; he’s seen it all before and as he wept the bloody sweat and tears of his passion in the garden, so he must weep when we go spectacularly wrong. Yet by the Cross we are forgiven and by the Resurrection we may pass from this world to the next.

That’s all very easy to say…. yet, and it’s a problem with the modern church as well as the modern world, we have so often removed the mystery from our Liturgy. Jesus is mysterious, there’s no getting away from that… remember Jesus is God and God is the ultimate in mystery. Have we seen God?.no we haven’t…have we heard God? … yes we have… God speaks to us in those quiet moments when we thought we were alone, sometimes we hear and understand…. Sometimes we don’t listen and the moment is gone.

God’s Spirit is all around us, within us and outside us…. It’s the wind in the trees, its in the howling gale or a beautiful summers day.  it’s all pervading, yet we don’t always appreciate that God became a man so that we could gain a better understanding of the Divine. A God who is not some remote being floating around somewhere in the ether, but the God who, has been here, done it… and if God has a funny side… which I suspect he has… he’d say… and I’ve got the T shirt to prove it… but that would be tinged with a terrible sadness… as if he sees that we place more store by the T shirt than the reality, where we place some pretty ephemeral role models with feet of clay and even worse morals, above the simplicity and the beauty of belief…. And what of Jesus?

If Jesus had announced to first century Palestine that ‘I am God’ he would at best have been considered a religious nut, or at worst have been killed on the spot. God is more subtle than that… so he becomes not God the Father, but to the men and women of Jesus’ day ‘The Son’ and at Pentecost… the Spirit; they one and the same… God is Father, Son and Spirit. As the Son, God in the person of Jesus could, did and does bring us into close proximity with the Divine; to help our understanding of the mystery of God.

This Easter we should indeed say Jesus Christ is risen today, Alleluia! but relate it to the world we live in, not a remote period in the past. Jesus is the past the present and the future; don’t trap him in the past.

I, together with Loraine and Charlotte wish you a happy and Holy Easter.