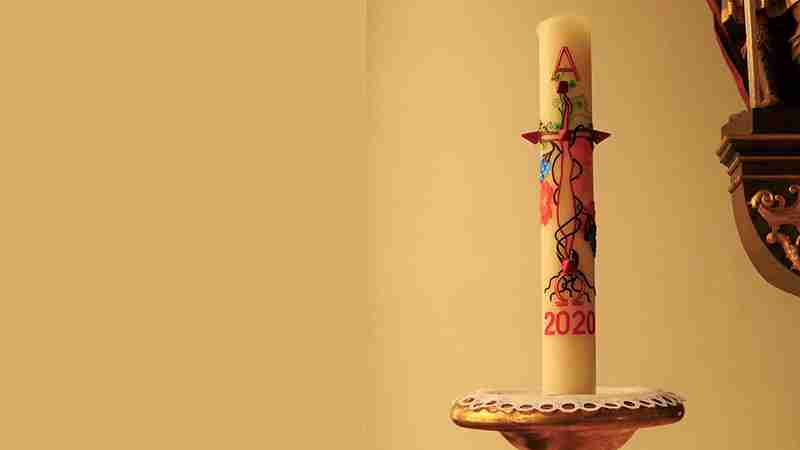 The Paschal candle represents Christ, the Light of the World.

The pure beeswax of which the candle is made represents the sinless Christ who was formed in the womb of His Mother. The wick signifies His humanity, the flame, His Divine Nature, both soul and body.

Five grains of incense inserted into the candle in the form of a cross recall the aromatic spices with which His Sacred Body was prepared for the tomb, and of the five wounds in His hands, feet, and side.

As previously mentioned during the Easter Vigil on Holy Saturday night the priest or deacon carries the candle in procession into the darkened church. A new fire, symbolizing our eternal life in Christ, is kindled which lights the candle. The candle, representing Christ himself, is blessed by the priest who then inscribes in it a cross, the first letters and last of the Greek alphabet, (Alpha and Omega ‘the beginning and
the end’) and the current year, as he chants a special prayer; then affixes the five grains of incense to represent the five wounds of Christ.

As to the origins of the candle and its customs much is uncertain and we very much rely on the research of Father Edward McNamara, Professor of liturgy at the Regina Apostolorum University in Rome who tells us: ‘The origin of the paschal candle is uncertain. The most likely origin is that it derived from the Lucernarium, the evening office with which early Christians
began the vigil for every Sunday and especially that of Easter. (today the Anglican equivalent is Evensong and in the Roman Rite – Vespers) In turn, this rite is probably inspired by the Jewish custom of lighting a lamp at the conclusion of the Sabbath. The rite therefore has its roots in the very beginning of Christianity. In the Lucernarium rite the light destined to dispel the darkness of night was offered to Christ as the splendour of the Father and indefectible light. This Sunday rite was logically carried out with greater solemnity during the Easter Vigil.

There is clear evidence that this solemn rite (The Vigil) began no later than the second half of the fourth century. For example, the use of singing a hymn in praise of the candle and the Easter mystery is mentioned as an established custom in a letter of St. Jerome, written in 384 to Presidio, a deacon from Piacenza, Italy.

Both St. Ambrose and St. Augustine are also known to have composed such Easter proclamations. The poetic and solemn text of the “Exultet,” or Easter proclamation now in use, originated in the fifth century but its author is unknown.

The use of the candle has varied over the centuries. Initially it was broken up after the Easter Vigil and its fragments given to the faithful. This was later transferred to the following Sunday; but from the 10th century the use prevailed of keeping it in a place of honour near the Gospel until the feast of the Ascension (now until Pentecost).

From around the 12th century the custom began of inscribing the current year on the candle as well as the dates of the principal movable feasts. The candle hence grew in size so as to merit the attribution of pillar mentioned in the “Exultet.” There are cases of candles weighing about 300 pounds. The procession foreseen in the present rite requires much more moderate dimensions. Indeed, during the Medieval Period Paschal candles often reached a stupendous size. The Paschal candle of Salisbury Cathedral on one occasion was said to have been 36 feet (11 meters) tall.

The paschal candle is usually blessed at the beginning of the Easter Vigil ceremonies and is placed on a special candlestick near the altar.