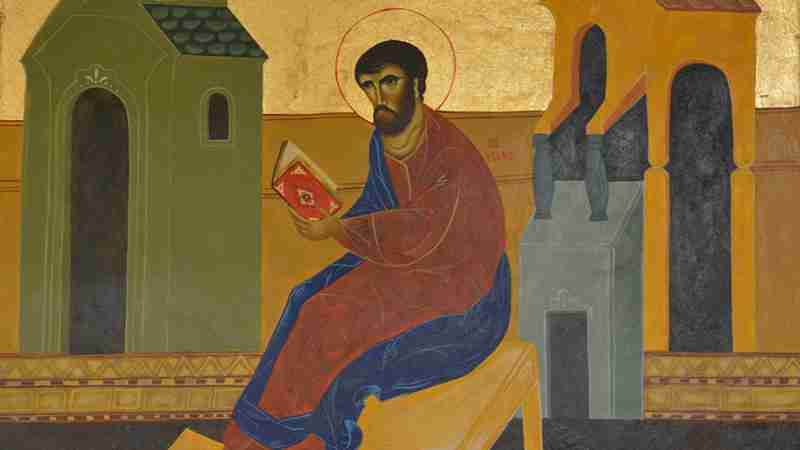 Most of what we know about Mark comes directly from the New Testament. He is usually identified with the Mark of Acts 12:12.
When St. Peter escaped from prison, he went to the home of Mark’s mother. Paul and Barnabas took Mark along on the first missionary journey, but for some reason Mark returned alone to Jerusalem. It is evident, from Paul’s refusal to let
Mark accompany him on the second journey despite Barnabas’s insistence, that Mark had displeased Paul. Because Paul later asks Mark to visit him in prison, we may assume the trouble did not last long.

We think the oldest and certainly the shortest of the four Gospels, the Gospel of Mark emphasizes Jesus’s rejection by humanity whilst being God’s triumphant envoy. Probably written for gentile converts in Rome—after the death of Peter and Paul sometime between A.D. 60 and 70—Mark’s Gospel is presented as a mystery Evidently a friend of Mark–calling him “my son”–Peter is only one of this Gospel‘s sources, others being the Church in Jerusalem (Jewish roots), and the Church at Antioch (largely gentile).

Like another Gospel writer Luke, Mark was not one of the 12 apostles. We cannot be certain whether he knew Jesus personally. Some scholars feel that the evangelist is speaking of himself when describing the arrest of Jesus in Gethsemane: “Now a young man followed him wearing nothing but a linen cloth about his body. They seized him, but he left the cloth behind and ran off naked” (Mark 14:51-52). Others hold Mark to be the first bishop of Alexandria, Egypt. Venice, famous for the Piazza San Marco, claims Mark as its patron saint; the large basilica there is believed to contain his remains.

A winged lion is Mark’s symbol. The lion derives from Mark’s description of John the Baptist as the voice of one crying out in the wilderness: “Prepare the way of the Lord, make his paths straight” ’,
(Mark 1:3), which artists compared John to a roaring lion. The wings come from the application of Ezekiel’s vision of four winged creatures to the evangelists. Mark’s Feast Day in the Western Catholic Tradition is 25 April

The Coptic Orthodox Church tells us: Mark was born in the Pentapolis or Qairawan (Now Tunisia or Libya) approximately 15 years after our Lord was born. His parents were Jewish? He witnessed the preaching of our Lord in Palestine as well as his passion. He is the author of the earliest Gospel to be written (it was written in Greek).He was the founder of Christianity in Egypt or in Alexandria at least. He came to Alexandria in approximately 48 AD and was martyred in 68 AD when pagans of Serapis (the Serapion-Abbis Greek Egyptian god) tied him to a horse’s tail and dragged him through the streets of Alexandria’s district of Bokalia for two days until his body was torn to pieces. The Church celebrates his martyrdom on the 8th of May each year. His head is in a church named after him in Alexandria, and parts of his relics is in St. Mark’s, Cairo’s Cathedral. The rest of his relics are in the San Marco Cathedral in Venice, Italy.