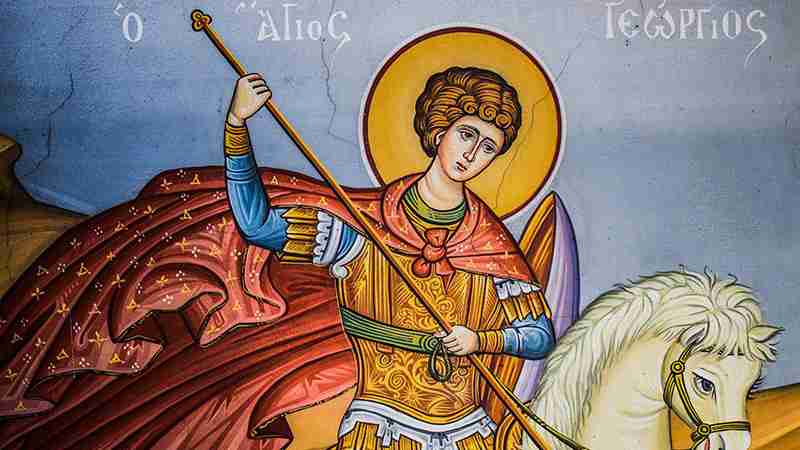 But who was St. George, and what did he do to become England’s Patron Saint?

Very little is known about St. George’s life, but it is thought he was a high ranking officer in the Roman army who was killed in around AD 303. It seems that the Emperor Diocletian had St. George tortured to make him deny his faith in Christ. However, despite some of the most terrible torture even for that time, St George showed incredible courage and faith and was finally beheaded near Lydda in Palestine. His head was later taken to Rome where it was interred in the church dedicated to him.

In the Middle Ages the dragon was commonly used to represent the Devil. Unfortunately, the many legends connected with St. George’s name are fictitious, and the slaying of the ‘Dragon’ was first credited to him in the 12th century. St. George, so the story goes, killed a dragon on the flat topped Dragon Hill in Uffington, Berkshire, and it is said that no grass grows where the dragon’s blood trickled down!

It was probably the 12th century Crusaders however who first invoked his name as an aid in battle. King Edward III made him the Patron Saint of England when he formed the Order of the Garter in St. George’s name in 1350, and the cult of the Saint was further advanced By King Henry V at the battle of Agincourt in northern France.

Shakespeare made sure that nobody would forget St. George, and has King Henry V finishing his pre-battle speech with the famous phrase, ‘Cry God for Harry, England and St.  George!’ King Henry himself, who was both warlike and devout, was thought by his followers to possess many of the saint’s characteristics. In England St. George’s Day is celebrated, and his flag flown, on his feast day 23rd April.

St George was not our first patron saint – That honour was originally held by St Edmund commonly called Edmund the Martyr, King of the East Angles in the 9th century AD. Born on Christmas Day 841 AD, Edmund succeeded to the throne of East Anglia in 856. A Christian from birth, he fought alongside King Alfred of Wessex against the pagan Viking and Norse invaders (the Great Heathen Army) until 869/70 when his forces were defeated and Edmund was captured by the Vikings. He was ordered to renounce his faith and share power with the pagan Vikings, but he refused. According to a 10th century account of the saint’s life by Abbot of Fleury, quoting St Dunstan as his source, Edmund was then bound to a tree, shot through by arrows and beheaded. The date was 20th November. His decapitated head is said to have been reunited with its body with the help of a talking wolf who protected the head and then called out “Hic, Hic, Hic” (“Here, Here, Here”) to alert Edmund’s followers.

It is uncertain where he was killed; some accounts state Bradfield St Clare near Bury St Edmunds, others Maldon in Essex or Hoxne in Suffolk. What is known is that in 902 his remains were moved to Bedricsworth (modern Bury St. Edmunds) where King Athelstan founded a religious community to care for his shrine which became a place of national pilgrimage. King Cnut (Canute) built a stone abbey on the site in 1020 to house the shrine. For centuries Edmund’s resting place was patronised by the kings of England and the abbey became increasingly wealthy as the cult of St Edmund grew. Such was the influence of St Edmund that on St Edmund’s Day in 1214 rebel English barons held a secret meeting here before going to confront King John with the Charter of Liberties, the forerunner to Magna Carta which he signed a year later. This event is reflected in the motto of Bury St Edmunds: ‘Shrine of a King, Cradle of the Law’.

St Edmund’s influence began to wane during the Third Crusade in 1199, when Richard I visited the tomb of St. George in Lydda on the eve of a battle. The next day he won a great victory. Following this triumph, Richard adopted St. George as his personal patron and protector of the army. So St George was pm the road to national patronage.

Also in contention is Edward the Confessor, rotten king, but Holy man and whose Feast Day we celebrate on 13 October Edward was more interested in religious affairs and building St. Peter’s Abbey at Westminster, the site of the present Abbey, where he is buried. His piety gained him the surname “the Confessor”. He died in London on January 5, and he was canonized in 1161 by Pope Alexander III.

There are periodic moves to replace George with with St Edmund or St Edward…. What do you think? St George is also the Patron of Bulgaria, Georgia, Palestine, Ethiopia, Serbia, Slovenia, Lithuania, Portugal, Malta, Montenegro and the States/Cities of Bavaria, Haldern and Freiburg in Germany, Catalonia, Genoa, and Ferrara in Italy, Beirut in Lebanon, Moscow in Russia, Modica in Sicily and London. We must not of course forget George is invoked for farmers and other agricultural workers, butchers, horses, horse – riders and saddle – makers, and also soldiers.  And, he’s also the patron saint of herpes, leprosy, skin diseases and syphilis.