we take a look at the Sculpture Stones which have been moved from the Chapter House to the north aisle of the church where they can again be viewed by the public. They join the 9th-10th century crosses, cross slabs and the effigies of a priest and knight already in the church.

The destruction of St John’s started in the mid-sixteenth century when, during the reign of Edward VI, the College of Canons was dissolved. The east end of the church was then deliberately dilapidated and allowed to fall into ruin. Over subsequent centuries domestic dwellings were constructed within the ruins, and De Quincey’s mother once lived in what is now the Chapter House. The collapse of the north-west tower on Maunday Thursday 1881 perhaps encouraged Victorian interest in St John’s and contemporary photographs of the ruins provide a ‘picturesque’ view, as popularised by William Gilpin a century earlier. This renewed interest resulted in a tidying of the ruins, during which many sculptural stones were removed to the Chapter House and the floor of the truncated north-west tower, to be lost to public view.

During the Summer and Autumn of 2021 Cheshire West and Chester Council carried out large scale maintenance of the St John’s ruins. It was decided, for ease of future maintenance, to remove the stones from the base of the tower and store them in the Chapter House. However, the Chapter House is a finite space and this decision provided an opportunity to move some of St John’s most important sculptural stones from the Chapter House to the north aisle of the church where they could again be viewed by the public. They joined the 9th-10th century crosses, cross slabs and the effigies of a priest and knight already in the church.

The stones are not exhibited in any particular order at present. The earliest are examples of Romanesque sculpture. They comprise a capital, carved with decoration and the image of an ox carved on its underside, together with decorative examples of ‘egg and dart’, dog-tooth and lozenge.

However, the main focus is on the thirteenth century east end of the church which is represented in this collection by roof bosses and a capital. The capital, which was recovered from the bank in the ruins this year, is carved with a Norman head which, I am told, proves that the roof was vaulted in the thirteenth century and not later. There are some fine carved roof bosses from this period; Christ, with arms outstretched, stares out in Majesty; the Virgin Mary is addressed by the Angel Gabriel in the Annunciation and there is a large swirling acanthus representing Gethsemane. There are two smaller bosses, representing scenes from the Stations of the Cross, the first depicting the scourging of Christ and the second the twelve Apostles in the Garden of Gethsemane. There is a third very worn boss in the series which remains in the Chapter House. This would suggest that the complete stations of the cross were once in the church ceiling. A single representation of a ‘regular’ roof boss has been included, although there are still a dozen remaining in the Chapter House.

However, not all the bosses depict biblical or religious subjects. Two of the roof bosses represent the Wild Man, better known as the Green Man. I have referred to him by his former name because of the Green Man’s pre-Christian existence and consequent association with paganism.

The Order of the Garter was founded by Edward III in 1348. A Garter Stone has lain exposed in the ruins for many years and has now been moved into the north aisle. However, there were two large stones lying beside it preventing easy removal. When these stones were turned over they were both carved with the Order of the Garter with a Coats of Arms. None of them, so far, have been positively identified; any suggestions would be gratefully received.

Towards the east end of the aisle is a miscellany, a fragmentary group, of stones. They range through examples of a gargoyle, a grotesque, a corbel and two ambiguous pieces fashioned like legs and talons that may have come from the crossing tower. The group also includes some smaller architectural pieces and what appears to have been part of a Roman column. A fragmentary medieval broken cross slab with a tree of life carved on it has also been included. You will have to take my word for it but an eighteenth century inscription is carved on the underside. Furthermore, there are signs that a brass plaque was attached to it; recycling the stone for the third time. Finally, in this section, there is the top half of a stone which appears to be carved with the Cheshire Sheaf. It is dated 1585. I have assumed that the date relates to the passing of the church by Elizabeth I to the parish. As an aside our organ builders recently drew my attention to a stone on the interior north transept wall with the date 1589 carved on it. This would suggest that it marks the date the transepts were reduced to their present size.

Finally, there are three stones that don’t fit into a particular category. The first is the Nun’s stone, a rectangle of sandstone, carved with an inscription but as yet undated. The second is the Heart Stone which is placed next to the knight’s effigy. These stones represent a medieval practice where a man’s heart is interred separately from the body. It is a 13th-14th century practice that people generally associated with the Crusades. Lastly, there is a worn medieval sandstone statue. I understand that these are very rare as they were a target for the iconoclasts. The figure is bearded and we refer to him in the church as St John the Baptist.

That ends the brief description of the stones. A long journey lies ahead. The north aisle roof and ceiling require urgent repairs before anything can be done about creating a public display of the St John’s stones and associated historical artefacts. Meanwhile, I would welcome any further information you might have about our stones. 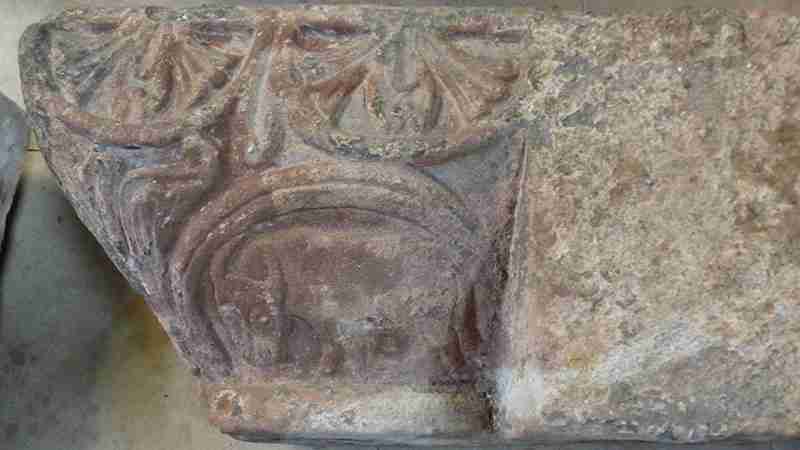 The Romanesque capital depicting the ox 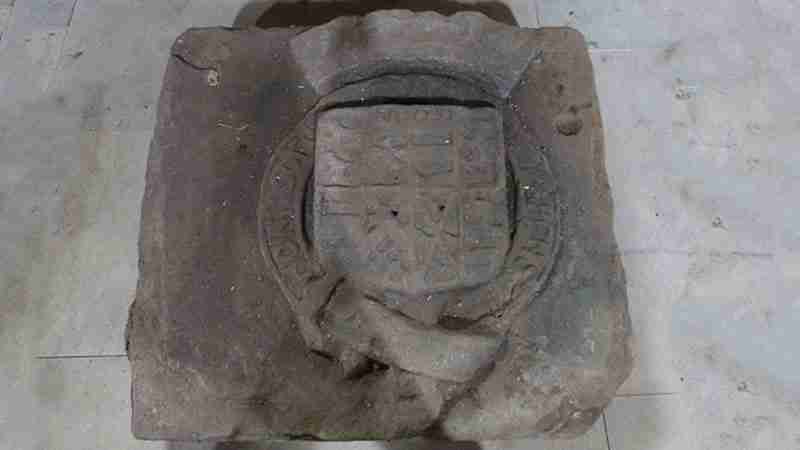 A Garter Stone with an heraldic shield. 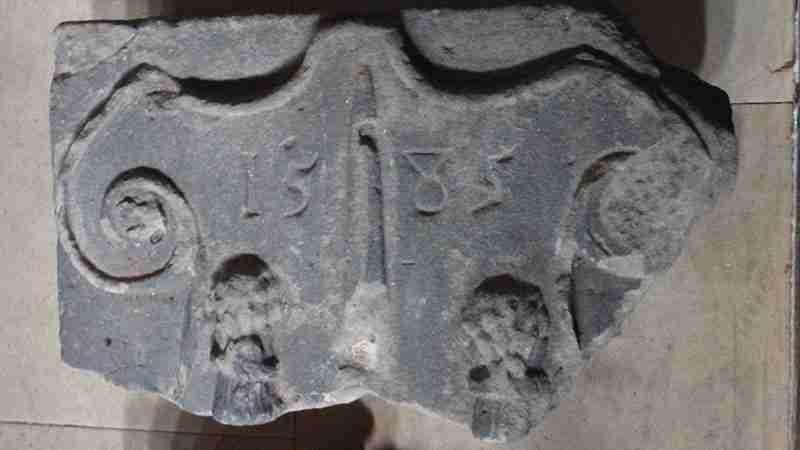 The stone showing the date that (we think) the church was handed over to the parish. It has the date 1585 on it, and part of what looks like the Cheshire sheaf.