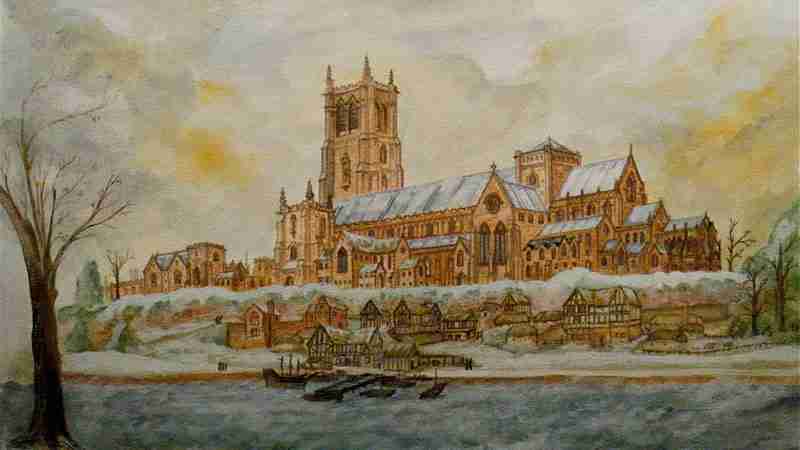 Historians define the Medieval Period in our history from 1066, with the death of Edward the Confessor and the accession of William the Bastard Duke of Normandy, to the end of the Wars of the Roses with the defeat of the last Yorkist King of England Richard III by Henry Tudor, Earl of Richmond, at the Battle of Bosworth Field on 22 August 1485.

The years from 1066 to 1485 saw St John’s at the height of its power and influence, rising from a great Saxon Minster with a possible Bishop at the helm to a great Medieval Cathedral and Co-Cathedral, the most historic church building in Cheshire.

In 1066 as King Edward (St Edward the Confessor) lay dying, St John’s had been enhanced by Leofric Earl of Mercia and his more famous wife Godgifu (Godiva). Sadly, we do not know what the Minster looked like as all we possess are some Saxon stones, but whatever it was like the Saxon Church was soon to be destroyed as the Norman Conquest moved north arriving in Chester in 1069 and in 1075 the Council of London under Archbishop of Lanfranc of Canterbury decreed as follows: 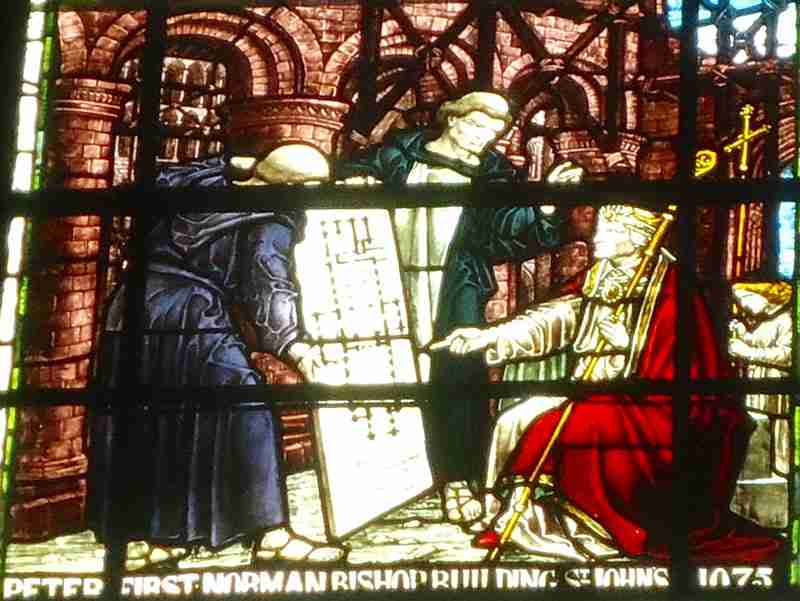 By the decrees of Popes Damasus and Leo, and by the Councils of Sardica and Laodicea, bishops’ sees should not be in vills, they should be in cities so the Council agreed that three bishops should migrate from vills to cities – those moved were Herman from Sherborne to Salisbury, Peter from Lichfield to Chester and Stigand from Selsey to Chichester. The case of some others who were in vills or hamlets, was postponed for the king’s hearing, when he returned from a war overseas.

The image shows detail from the Great West Window of Bishop Peter de Leya examining the plans of his new Cathedral.

Immediately, Bishop Peter de Leya the first Norman Bishop of Mercia began the construction of a massive Cathedral for his See. This is the first real act of the Medieval period affecting St John’s directly.

Peter de Leya died in 1085 and was buried within the Cathedral Church. Bishop Peter’s successor in 1085 Robert de Limesey had to wait for Lanfranc’s death in 1089 before in 1102 scurrying off to Coventry and to richer pickings. Additionally, it is said he was frightened of the Welsh and didn’t like competing with the powerful Earls of Chester (Hugh d’Avranches called the Wolf – Hugh Lupus) and his successor Richard d’Avranches (1094 – 1120) who died in the White Ship.

As for St John’s, building continued throughout the Medieval period so that 100 years ago the great Architectural Historian Sir Nikolaus Pevsner could say, that what is left of the great Nave is one of the finest examples in Europe of the transition from the Romanesque to the Gothic.

There are many stories and events in and around St John’s that impinge directly or indirectly with English and Welsh Medieval History. And we go back right to the start of Medieval England; for our first story, about the Saxon
King Harold in 1066. Did you know that Harold Godwinson survived the Battle of Hastings and came to live in an Anchorite Cell attached to St John’s and, that’s just the start. Here are a few of the highlights:

In 1386 – 1389, the Medieval Court of Chivalry sat in St John’s under the Lord High Constable of England, Thomas of Woodstock and First Duke of Gloucester, last surviving son of Edward III and uncle to Richard II; to decide who may bear the Coat of Arms: Azure a Bend Or.

If you want to delve deeper into English and Welsh Medieval History and St John’s itself, there is lots to see and plenty of information in the Church

New virtual reconstructions have unveiled the medieval glory of landmark Chester buildings ready for exciting, interactive exhibitions which will give people the chance to step back in time and experience the 14th Century city.

The Water Tower and St John the Baptist Church in Chester have been digitally recreated in new videos showing how they would have looked in the period.

The MOB initiative, led by the University with the Department of Continuing Education at the University of Oxford and the Grosvenor Museum in Chester, aims to bring medieval and early modern historical artefacts to life – which have not been exhibited before, to challenge perceptions of the period as static and unchanging, and elite narratives of history by focusing on everyday objects.

The virtual reconstructions were realised by Martin Moss of Dextra Visual – a historic illustration, 3D modelling and digital animation studio, based just outside Chester. For a look in advance of the exhibitions, visit: https://youtu.be/fpW_vo8g2nM, or the MOB website at: https://mob.chester.ac.uk/activities/place-objects-in-past-surroundings-using-augmented-reality/.